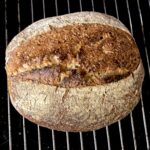 Ok, the title might sound like an exaggeration, but let me tell you this: it was the single most important thing that helped me getting nice, rising and great bread.

I’ve started baking sourdough just four months ago. I had to fight to get spring oven. My dough would sometimes become a frisbee in the oven, or it would rise ridiculously low.

Then two days ago I received a dutch oven I bought online. It was a small model from Holm, but it was on sale and I didn’t want to spend so much money before I knew this would fix my baking. Holm has a good reputation for having good products, and the cast iron pan has a flat lid that I thought would be ideal to bake in. In other words, I’d put the pan upside down so that the dough could bake on the lid and be covered by the pan.

It was a coincidence that I was going to bake that day – I didn’t expect the pan to arrive so fast. Perfect timing – I washed it, warmed it in the oven and baking I went.

After twenty minutes, I removed the pan, ie., the part of the pan that was covering the bread, and I got this shock: I’ve never got bread that rose that high, and was so round and nice. It was simply amazing!

I baked another one right away, as I had two doughs since I had a friend from work who came so we could do something work related, and the second bread didn’t rise as much, but that was my fault as the oven cooled a bit and the bread also over proofed clearly. Still, the taste was amazing, the bread got very good air distribution and the crust was great.

Yesterday when I came back from work I started preparing some dough so it could go to the fridge at night. For this dough – a 75% hydrated one – I increased the amount of whole wheat and put some linseeds (which stole some of the hydration, sadly). I also put way too much starter as I wanted a faster fermentation.

I started to work on something really exciting and forgot about the bread, so it got a too long bulk fermentation. I formed it right away and to the fridge it went. This morning it went right to the oven, and, again, a wonderful, wonderful bread.

So three bread (I’m only showing the picture of the first and the third loaves), three absolutely great tasting loaves. I feel I still can go higher on the loaf’s height, but suddenly it doesn’t really matter because the bread got really nice airy, soft crumb, that was delicious.

The dutch oven was not just about the oven spring, but also about a dough that expanded uniformly, thus rendering a loaf that has more taste, was less wet when done, and remained with a fresh taste and texture over time.

I know that there are certainly lots of people that are baking amazing bread without a dutch oven. I couldn’t. Maybe it was my oven that wouldn’t retain steam? I don’t know.

So if your dough is not having a proper oven spring and you have tried every piece of advice on the book, try the dutch oven. I was about to quit baking, but now had my motivation renewed.